I finally made pants.

Actually this is my 2nd pair of pants.

Side bar: I made jeans!

Side bar subheading: the Lander Pant disaster of a muslin I made doesn’t count and we’re Not Talking About It.

…but I can’t get decent photos of anything on my body, least of all light-sucking black-on-black denim. I’m really struggling to get photos. I had hoped this was a skill that would improve over time, but there’s no light when there’s time and no time when there’s light,  and there are no uncluttered rooms or pretty backgrounds. 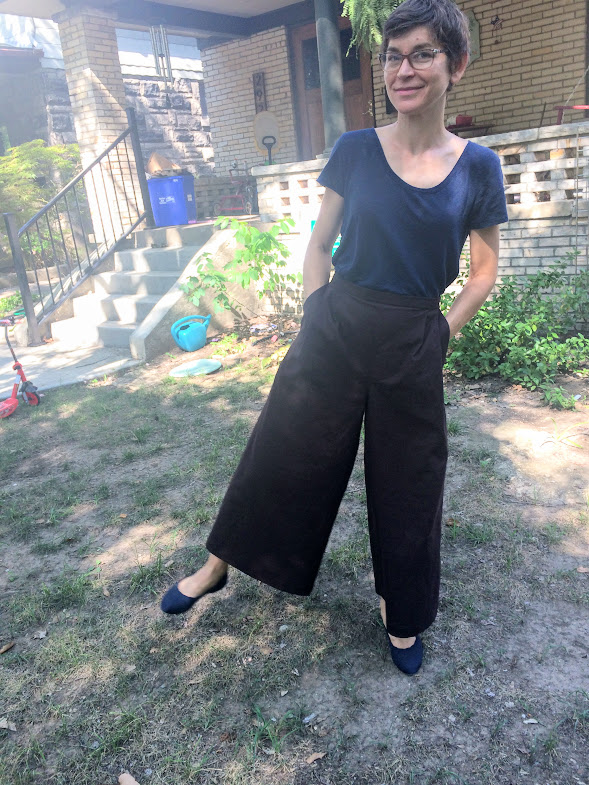 Pattern: Mercury Collection by Marilla Walker, view C
Size: 3 waist graded to 4 everywhere else
Mods: I must have short legs. I chopped a lot off. I might shorten them even further to a couple inches above the ankle. Then again, I might not.

It seems fitting (ha ha, pun intended) that after making jeans I would do a 180 in just about every pants-making respect possible. Linen instead of denim, an elastic waist instead of fly, clownishly wide legs instead of slim, a style whose only fit requirement is that the elastic is snug enough to stay at your waist while being wide enough to go over your tush. They feel ridiculous to wear, but they were super easy to make and I’m pleasantly surprised to find I can wear them without them wearing me. Good enough! One office-wear garment done.

I always say that I learn by making mistakes. I also always say that if I don’t do a thing 3 times I’m not doing it right. Usually I’m referring to spreadsheets or accounting software, but here is the story of my first attempts to sew with knits in 3 parts.

This pile of regret was supposed to be a wearable muslin of Moneta by Colette Patterns. The less said the better. Fit issues, fabric issues. I gave up when trying to gather the skirt. That didn’t work at all. No problem with the pattern or the instructions, I simply had no idea what I was doing and sometimes when you bite off more than you can chew you end up choking.

I was never going to sew with knits again. At least for a long while.

I was inspired to revisit my disappointment while binge-listening to Love to Sew (so, so good!) and by Kelli Ward’s interview in particular. Better to start smaller, I decided, on a body that will be easier to fit, and this time no trying to gather knit fabric with clear elastic. I lowered the bar and my expectations. I harbored hope that this time would be different.

It wasn’t going well. I didn’t do a good job cutting which set me up for trouble piecing the pants together. I ordered knit fabric and realized when I was sewing that it would make a great t-shirt. How would that work for pants?! Badly, I thought. How do you finish a seam in knit fabric if you don’t have a serger? Do you just… not? Is the zig zag enough? How do you “press open” a seam that’s a zig zag stitch on fabric that curls? I grew more certain that these were another failure and chalked this project up as a sacrifice to the learning process. I stopped caring and plowed ahead sure that this would be a tear-jerker.

Imagine when after all that indecision and self-doubt I held up a pair of what appear by all accounts to be actual, not entirely terrible, wearable pants:

I frowned at them wide-eyed and thought, “HOW DID THAT EVEN HAPPEN?!?” and “Wow, knits really are forgiving!” I mean, they’re a mess and you’ll never get to the inside of these, but pants!

After the shock wore off (the surprise still hasn’t) I thought I would try my luck again with the same pattern but heavier knit fabric that I purchased during a stressful trip to Jo-Ann Fabrics to pick up all those bibs and bobs online fabric retailers so frequently don’t offer. I skipped the cording, again, because I ran out of patience while shopping.

This story doesn’t have a pat ending. It’s a mixed bag. First off, these are some ugly pants. I don’t know exactly what I was thinking. This happens to me a lot at Jo-Ann. The stress of shopping there results in some strange choices. Also, I overcompensated in terms of fabric-weight. I thought these pants would be cozy, but they’re bulky. Although the sewing went a lot more smoothly I  learned some valuable lessons, like to match stripes to the outside of the pocket at the side seam (not the inside), and to double check that the cuff seam is on the inside leg seam (not the outside) and to make sure cuff patterns go in the same direction as the rest of the pant. 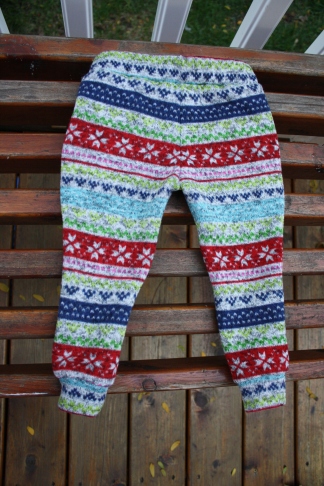 But look beyond the garish fabric! I made more pants! In half the time! And they didn’t scare or intimidate me at all. There’s far to go, but I’m on my way and eyeing that Moneta pattern, again. It would be so so so perfect for fall…